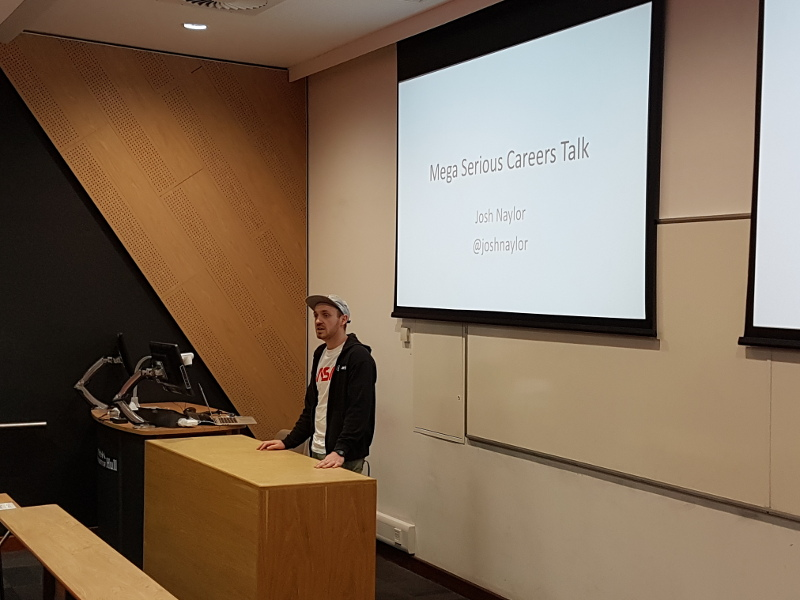 It was great to have Josh Naylor, one of our lovely and accomplished alumni, come and give a talk. We had just allocated the words to the Three Thing Game teams using the Three Thinged Bandit before handing over the floor to the Lead of Evangelism for the EMEA region at Unity.

Josh gave a great talk about how to optimise your extra-curricular work for kickstarting your career in industry. Although plenty of the points were those that we have laboured to our students over the years, it was great to have Josh’s industry validation. Hopefully, the advice will be headed with such snippets as taking part in Three Thing Game, and using blogs to document and show off your work (like I mentioned here: http://goparker.com/post/2018-04-23-csblogs-and-blogging/).

After he finished talking about that, Josh continued on to Prototyping with Unity. He showed off a bunch of interesting features that illustrate how Unity can be used to quickly add a number of advanced graphics and physics features to your games with very little code required.

Unfortunately the talk was cut slightly short as the power socket that we had at the podium appeared to not be outputting any electricity resulting in the eventual shutdown of Josh’s laptop.

Some of our digital team were also on hand as they will be doing a video interview/article covering Josh’s interesting jet-setting job and show off our alumni.

Thanks to Josh, and hopefully we will be seeing more of him as he plans to move back to the region.